M4KNSH goals are simple.  Raise money for youth charities in the Nashville area, and have fun while doing it.  We strive to give back to this community, create opportunities where there is a void, and invest in our youth to ensure they feel connected to the future.

The year was 2020….a year we all can say we wish would move on as fast as possible.   But a few good people wanted to invest their time and energy to make this world a better place and decided to start here in our beloved home of Nashville.

In 2020 M4K Chapters across the country raised over $1,800,000 for children’s charities and its high time Nashville joined them. We are launching our chapter this year and we are excited to be partnering with High Hopes Development Center in Franklin, TN. This wonderful organization provides preschool, daycare, and therapy to kids with special needs. To learn more about their organization, visit www.highhopesforkids.org

At the end of the growing season, we have Stache Bash, a mustache-themed costume party during which we crown the winner of the coveted “Sweetest Stache” and hand out other awards that are cherished by the recipients. So it’s all pretty simple: mustache, charity, and competition infused with meaningless pageantry. You can spare four weeks of your life for that.

In the words of Mark Twain, “I’ve never met a man with a mustache that was not good, honest, decent, awesome, good-looking, humble, sexy, wise, and a fantastic dancer.” (from “The Book of Stuff Mark Twain Never Said”)

MEET OUR BOARD OF DIRECTORS 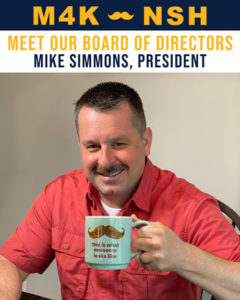 Mike Simmons is a risk consultant for Scott Insurance in Franklin, TN. He is a devoted husband and father of two children. Mike is a Virginia native where he discovered the Mustaches For Kids – America non-profit organization. After moving to middle Tennessee in 2017, he realized there was no local M4K chapter. He saw the positive impact an organization, like Mustaches for Kids, could make to the community and children’s charities in this area. He founded the M4K-Nashville chapter in April of 2021 and serves as President.

When not working or serving on the board for M4K NSH, you might find him playing kickball with his son and kids in his neighborhood.

Matt McCall is Chief Financial Officer for American Constructors TN in Brentwood, TN. Matt is a Texan at heart, but has called Middle Tennessee home since 2011. His friends often remind him, “There would be no Texas without Tennessee.” Matt and his wife, Kimberly, have two kids and are actively involved in several charitable organizations. When not working or serving on the board for M4K NSH, you might find Matt rooting for the Dallas Cowboys while enjoying Blue Bell Ice Cream.

Jamie Holmes is the Marketing and Communications Manager for T.W. Frierson Contractor, Inc. in Nashville, TN. She was raised in Washington State, moved to South Carolina for college, where she played Division II Softball, and in 2011 moved to Nashville to pursue her master’s degree from Belmont University. Jamie is involved in several industry groups including NAIOP, NAWIC, SMPS and ABC. Jamie is a Certified Professional Services Marketer and is an active member, and soon to be Chair, of the ABC Emerging Leaders Board.

Jamie was approached by her co-worker, Nathan Heppler, about joining the M4K board as the Marketing Chair, and she enthusiastically said “Yes!”

Jamie’s family resides in Washington, where she visits frequently. She is also a “mom” to 3 large dogs, Clyde, Cora and Nooman. In her spare time, you will find her working in the yard/garden, renovating her house, spoiling her dogs and playing slow pitch softball.

Eric H. Davis is the EHS Specialist and Permitting Coordinator for T.W. Frierson Inc. in Nashville Tennessee. Eric is originally from Mississippi but has lived in Middle Tennessee with his wife and son for 15 years. He was introduced to M4K through Mike Simmons and after learning the huge effect it for kids decided to join. Eric spends his spare time with his family, fishing, hiking watching soccer and college football.

Nathan Heppler is an EHS Manager for T.W. Frierson in Nashville, Tennessee. Nathan is originally from Western Kentucky, but has lived in the Middle Tennessee area for over eight years with his wife and two children. He found out about M4K through Mike Simmons and once learning about the impact it has on children he was fully committed to M4K Nashville. Nathan spends his spare time with his family by the pool in the Summer and watching college football and basketball in the Winter. Go Cats!!!